Here goes a short exegesis of the official book description:

“Do things such as performance indicators, valuation formulas, consumer tests, stock prices or financial contracts represent an external reality? Or do they rather constitute, in a performative fashion, what they refer to?”

This is a mundane way to introduce the problematics of performativity in the understanding of economic matters (and the straight answer would be “yes” to the second question). The topic, of course, is not new and has been discussed at length in the literature. The same publisher, for example, is now also putting in the market The Limits of Performativity, a volume edited by Franck Cochoy, Martin Giraudeau and Liz McFall (previously available as a 2010 special issue of the Journal of Cultural Economy). Reference to this topic usually involves a discussion of Michel Callon‘s seminal and provocative “Introduction: the embeddedness of economic markets into economics”, the opening piece of 1988 volume from the Sociological Review Monograph Series titled The Laws of the Markets. There is however, fortunately enough, no integrative framework within which the discussion ought to be carried out and the topic remains quite wild. The Provoked Economy takes a rather catholic stance, and looks at performativity as an intellectual atmosphere rather than as a clear-cut concept. References there include for example Jean-François Lyotard (one of the first instances, if not the first, of “performativité” in dealing with social-scientific matters can be found there). But what does the book bring to the discussion, exactly? Again from the book description:

“The Provoked Economy tackles this question from a pragmatist angle, considering economic reality as a ceaselessly provoked reality. It takes the reader through a series of diverse empirical sites — from public administrations to stock exchanges, from investment banks to marketing facilities and business schools — in order to explore what can be seen from such a demanding standpoint.”

The “pragmatist angle”, which is grounded in the interpretation of pragmatism that can be found in philosophers such as Gilles Deleuze, is made theoretically explicit throughout the book. In order to do so, I revisit a series of empirical investigations that deal with paradigmatic problems of performativity in matters of economic business. The book is not a compilation of previously published work — rather an entirely new elaboration. But the empirical materials have been indeed used already in recent publications on public administrations (“Trials of explicitness in the implementation of public management reform”), stock exchanges (“Is a stock exchange a computer solution? Explicitness, algorithms and the Arizona Stock Exchange”), investment banks (“Back-office intricacy: the description of financial objects in an investment bank”), marketing facilities (“Becoming a measuring instrument: an ethnography of perfume consumer testing”) and business schools (“A flank movement in the understanding of valuation”). That said, which are the new ideas? Again from the book description:

“It demonstrates that descriptions of economic objects do actually produce economic objects and that the simulacrum of an economic act is indeed a form of realization. It also shows that provoking economic reality means facing practical tests in which what ought to be economic or not is subject to elaboration and controversy.”

Well, that is obviously too short for a summary. But it is true that some central insights that the reader can expect are pretty much those: an appraisal of the generative capacity of the simulacrum in economic life (in business pedagogy or in market research, for example), a consideration of the constitutive features of an act of description (as in the contractual description of a trade or in a performance assessment), an insistence on provocation as a the main guise of economic revelation (in considering for instance consumer preferences or business valuation), and a focus on the trials of explicitness that these constructive processes entail (as when we talk about enacting market equilibrium or the modernization of public management). More on this and other matters inside the book — and also here soon. 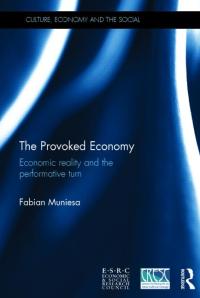